In December 2021 we were thrilled to celebrate Pastor Paul’s 10th anniversary as our Pastor.
Our celebrations kicked off during the service (in-Sanctuary and on Zoom). Here’s the replay (click to view).  Scroll to approx 44:05 min in to enjoy a delightful interchange between Rev George McLaird and Pastor Paul. 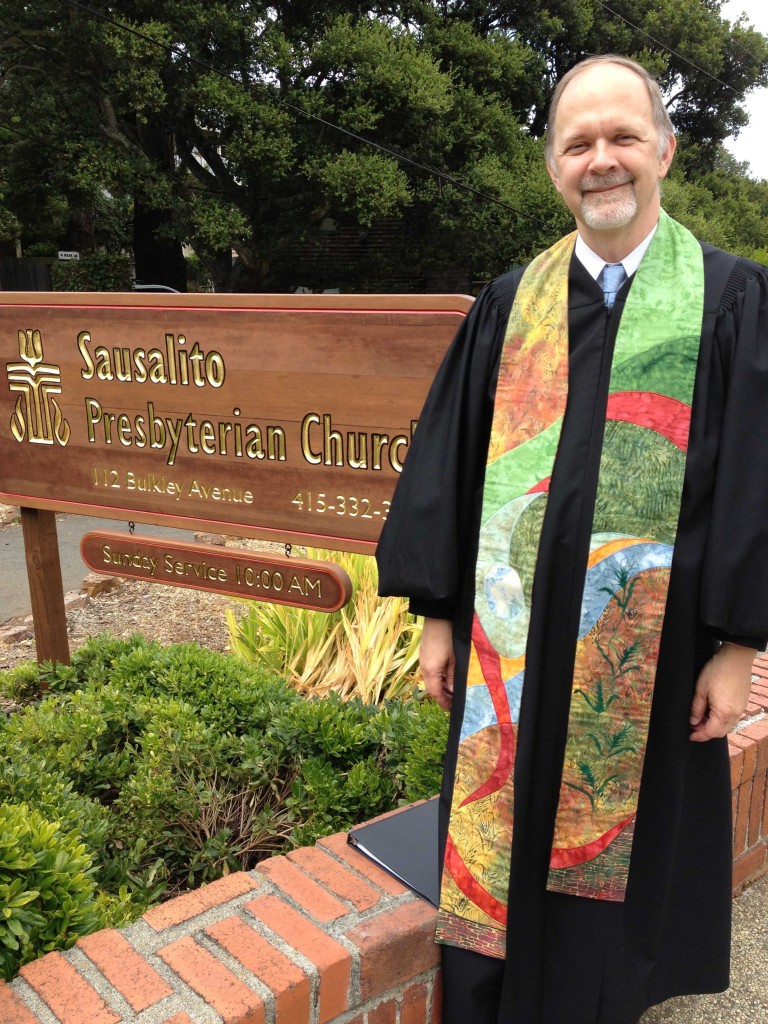 Reverend Paul Mowry is an authentic, open-minded man and pastor. He is an award-winning, thrilling speaker and storyteller. He is a creative collaborator and wonderful writer. He has a strength of character that is inclusive, fun, and healing. And he has many additional skills and talents that he shares naturally. Several have developed from his multiple careers in the film industry, in mediation, in corporate banking, and more. He is held in high regard by his congregation and communities.

We feel continually blessed to be in his company!

Here’s his story and a few SPC highlights. 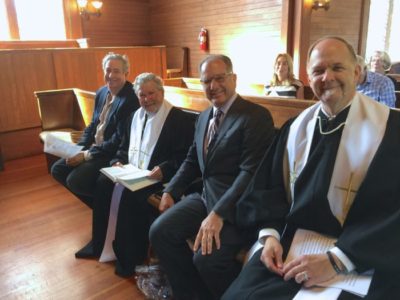 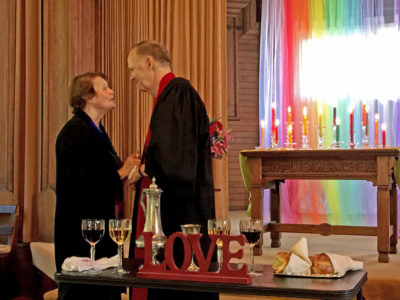 Paul is a “second career” minister from a family long steeped in the Presbyterian Church.  His mother was an elder and his father, grandfather, and great-great-grandfather were Presbyterian ministers. Some of his favorite keepsakes are their sermons,

including handwritten sermons of his great-great grandfather’s from the 1790s.  His sister and cousin are also ordained

Paul moved many times growing up and lived in

conservative, liberal.  Early on he understood

that Christ calls us to reconciliation with all people

everywhere and that everyone is a child of God.  This allowed him to make good friends with people from very diverse backgrounds. His family was deeply committed to civil rights and social justice.  His father was one of a handful of clergymen representing the Pittsburgh Presbytery in Dr. King’s Selma march; his mother was a well-known parent activist for LGBTQ rights in Portland, OR. Paul credits his parents with having taught him by example that Christ calls us to live our faith, not just to profess it. 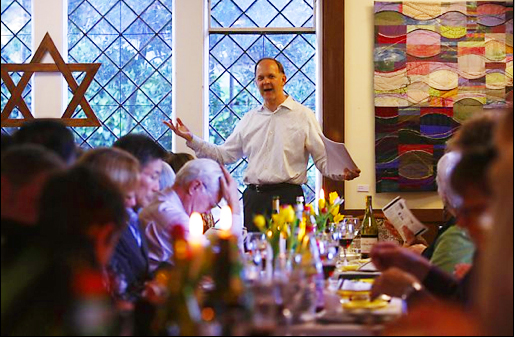 We renew our tradition of the Seder

After graduating from Evanston Township High School (near Chicago), he studied filmmaking at New York University, graduating with

academic and production honors.  He then spent a decade working in the film industry; in distribution with Orion Classics and then in

production with directors Susan Seidelman and Herbert Ross.  During this time, he and his partner, Joe Silverman, founded the Free

Randall Adams Campaign, a nationwide effort to free a Texas man sentenced to life in prison for a crime he didn’t commit.  (Mr. Adams

was finally exonerated and freed. His story is the subject of the Errol Morris film A THIN BLUE LINE.)

‘The Thin Blue Line’ was selected for preservation by the Library of Congress as being “culturally, historically, or aesthetically significant. 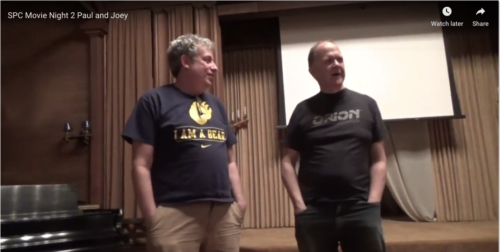 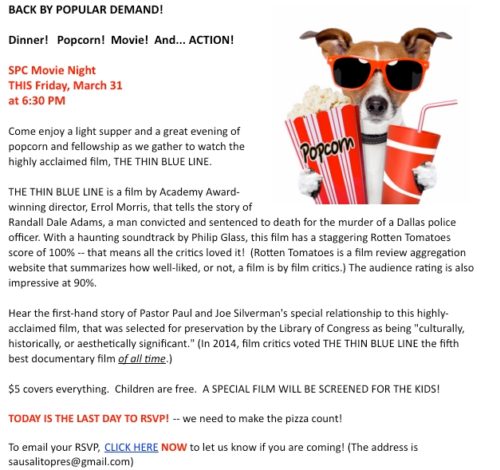 Paul then spent several years in corporate banking before moving on to work he felt had a more positive impact.

He was a volunteer mediator for child custody and visitation cases in the Manhattan Family Court, and worked to establish and support

peer mediation programs in troubled Bronx middle schools.  Part of his motivation in taking on conflict resolution work was the

commitment he learned from his family for inclusion and reconciliation.  He has always been interested in helping people get closer 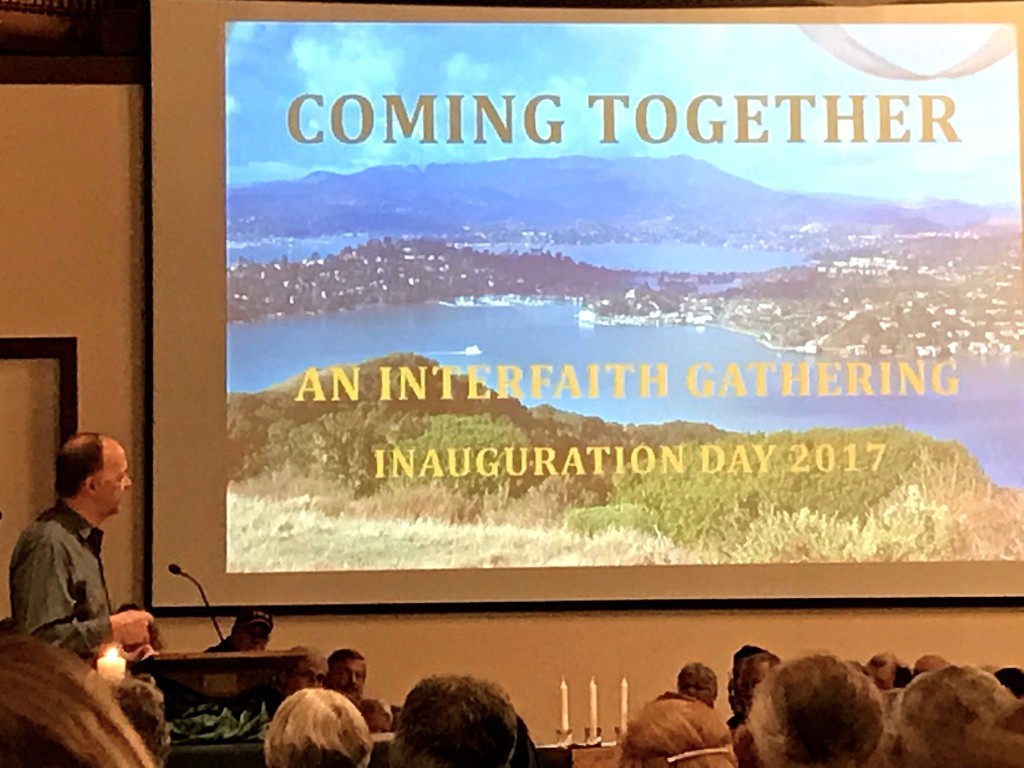 interfaith teaching and music. Designed to uplift and inspire people

in the Bay Area to work for values of inclusion, social justice, and

peace, the event drew a standing room only crowd of more than 400.

Thank you Blake Hooper for videotaping the event, which was featured

Paul says he “felt called since I was knit together in my mother’s womb,” and he embraced all life as ministry in his varied secular work.

“Wherever I went, wherever I worked, be it in the film industry or corporate banking, I found that everyone yearned for connection, to

fellowship; to purpose; to Creation around them and to their Creator within. I relished these opportunities to connect with people who

weren’t church-goers, who maybe didn’t even believe in God.  I think the “Good News” is that God created you and loves you.”  When he

applied to Union Theological Seminary (NYC), his grandfather’s alma mater, Paul says he felt “all my life was coming into perfect

alignment.” He received a Master of Divinity, with honors. 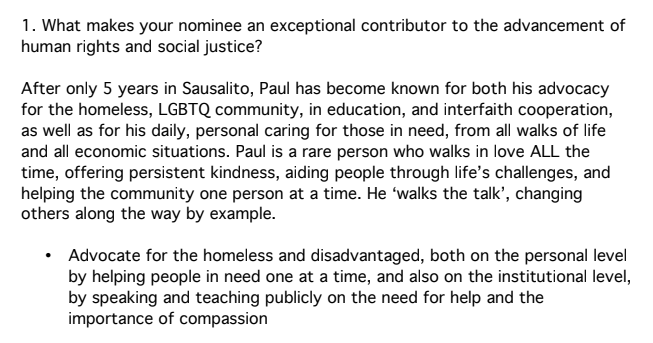 NOTE: Paul would like it to be known that he is the Vice Moderator of the Presbytery of the Redwoods, not Moderator of Vice (considering SPC’s adventurous reputation!!!

Paul and Joe recently celebrated their 35th anniversary.  Their pride and joy is their 15 year old daughter, Ellie. An interfaith family,

when Ellie celebrated her Bat Mitzvah, many SPC folk were there to celebrate this special ceremony with the Mowry-Silverman’s 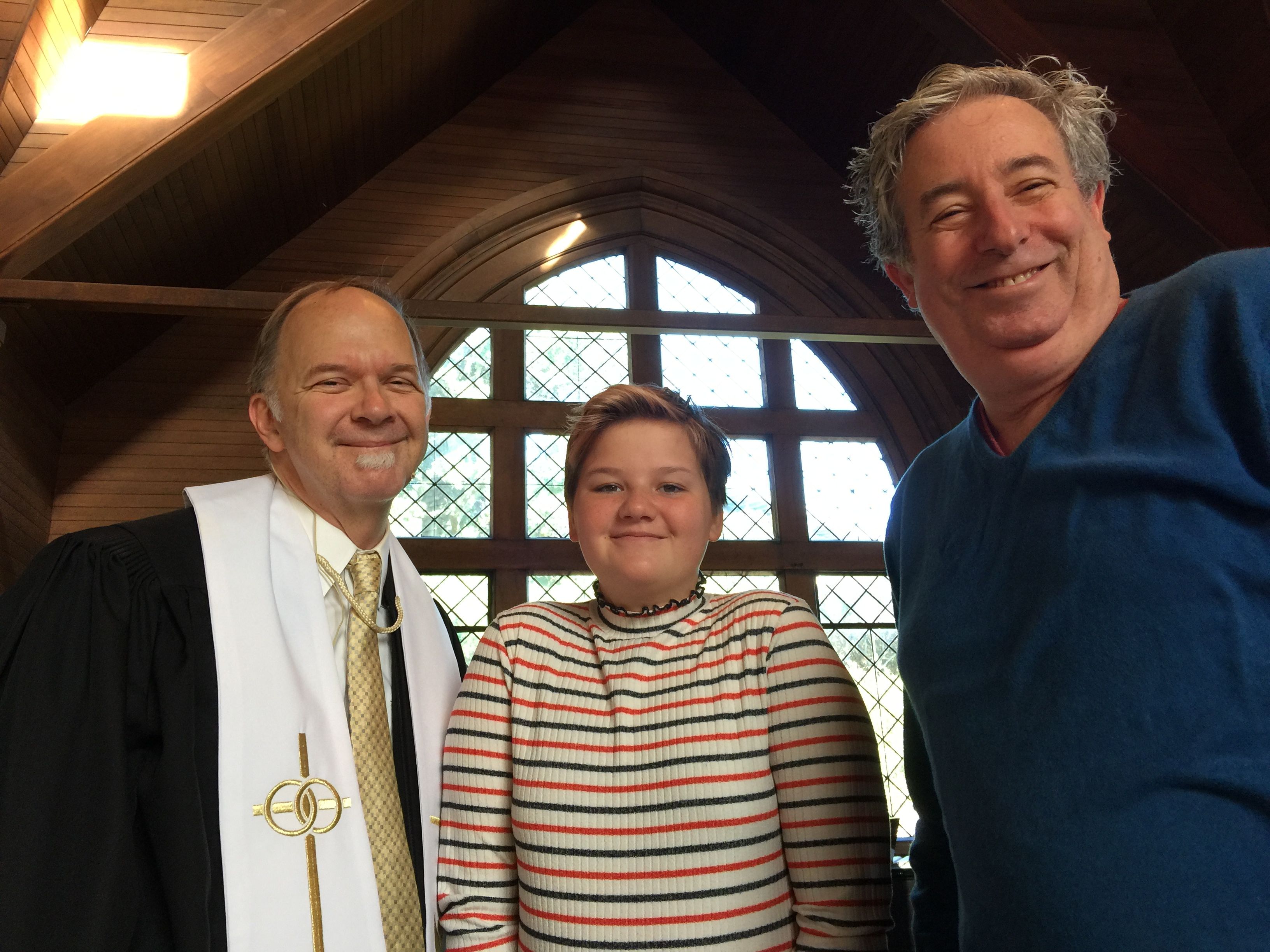 Paul loves the deep caring that is so evident in the community at Sausalito Presbyterian Church, “the church that calls itself a family.”

He was attracted by the spiritual yearning of the church, its long-time prayer and healing circle (30 years plus), the warm and friendly

atmosphere, and the congregation’s openness to being inspired by and learning from different religious traditions.  “This church

deeply understands the role that radical hospitality holds in the Judeo-Christian tradition.  Looking back,” he said, “I see now how

my family’s journey, and my own, through the church and with our commitment to justice, in a lived-out faith, and even my interfaith

relationship, molded me to meet the call from Sausalito Presbyterian Church.”

We are deeply grateful that Paul and his family have come home to Sausalito Presbyterian Church!

Pastor Paul was appointed Chaplain of the Sausalito Police Department. He received his badge at the City Council meeting
on Tuesday, June 10th, 2014 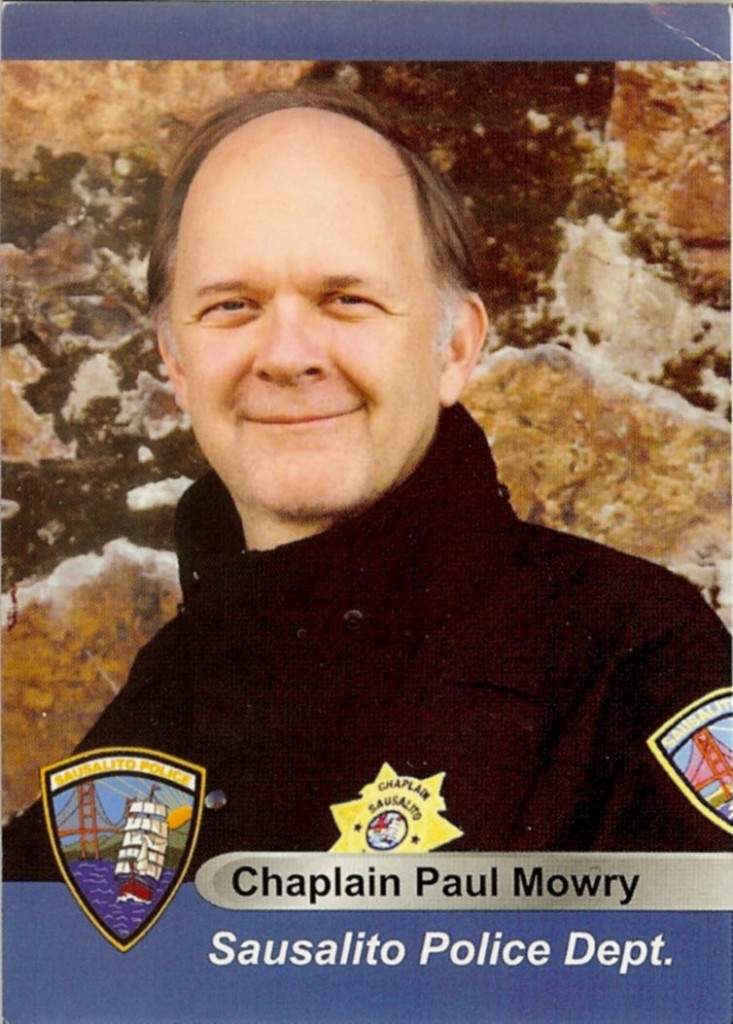 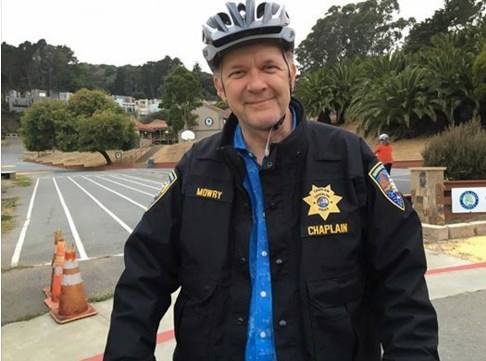 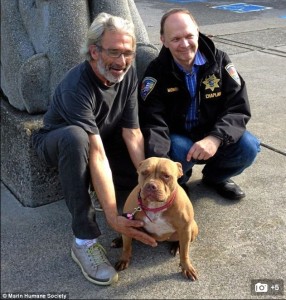 After a terrible winter storm, one of our regular lunch guests lost his dog.  Bringing together neighbors, the Sausalito police, and the Marin Humane Society, we were able to reunite them.  Through the generous donations of strangers, Steve was able to buy another boat to call home for himself and Daisy.  The story of bringing them together touched many hearts and it quickly went viral, being repeated online, on TV, and in newspapers across the nation and internationally. 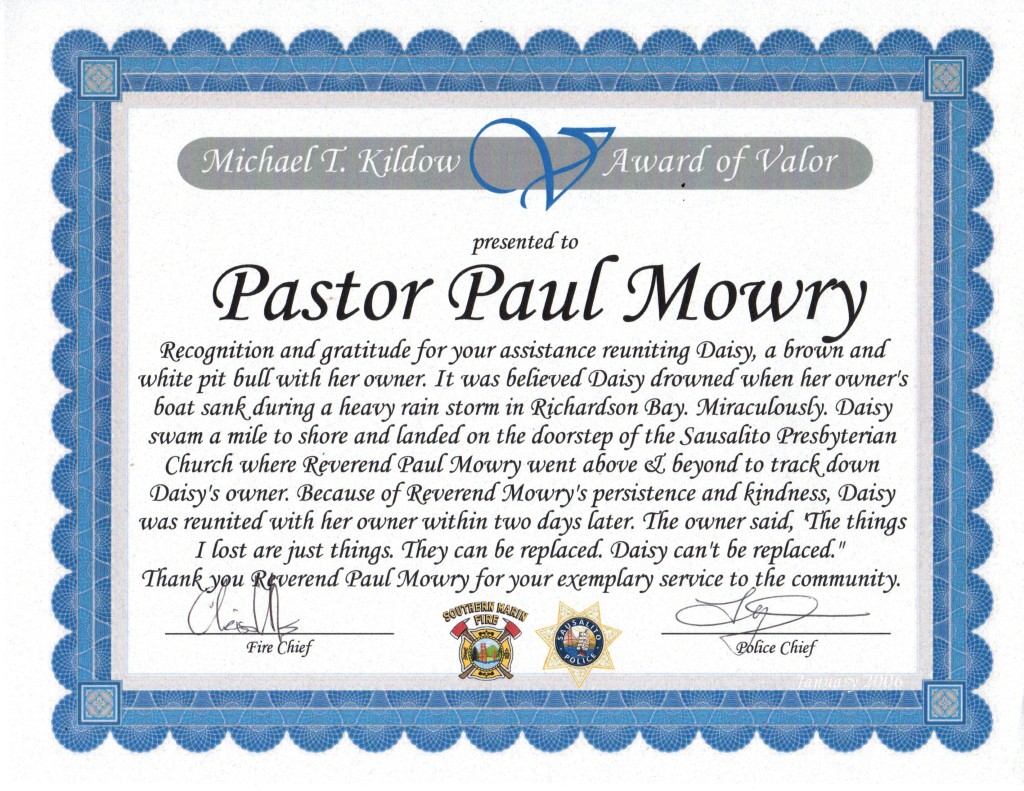 The police and fire chiefs acknowledged the efforts of our pastor, Paul Mowry, by presenting him with the Michael T. Kildow Award of Valor.

Amazing Tale of Survival and Reunion Spreads Across the Globe

Early last Thursday morning, SPC neighbor Jacquie Lipton came to the manse to tell Pastor Paul that a soaking wet, shivering pitbull was curled up on the back steps of SPC. Paul brought the dog inside and that began a 48-hour adventure that eventually revealed an astonishing odyssey that the dog had been through.

There has been a lot of news coverage, from Sausalito to London, England, reporting on the incredible saga of Daisy, the world’s sweetest pitbull. It was the Marin Independent Journal’s #1 story for three straight days (and one week later still ranked #3).  Click here to read the Marin IJ’s article, ‘Home For the Holidays,‘  Other reports can be found through a Google search.

Many people have called or dropped by and offered Steve and Daisy help.  Several bags of dog food were dropped off anonymously at the front door of the church.  The photo above shows Steve and Pastor Paul with Daisy.  If you would like to help, there are many ways.  For the time being, however, please do not bring dog food to the church.

No one would ever say SPC has gone to the dogs.  But they can now say the dogs have gone to SPC. 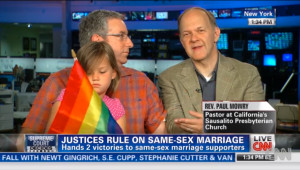 Click on image to the right to watch Paul and Joey and Ellie interview with Wolf Blitzer on CNN, June 26, 2013 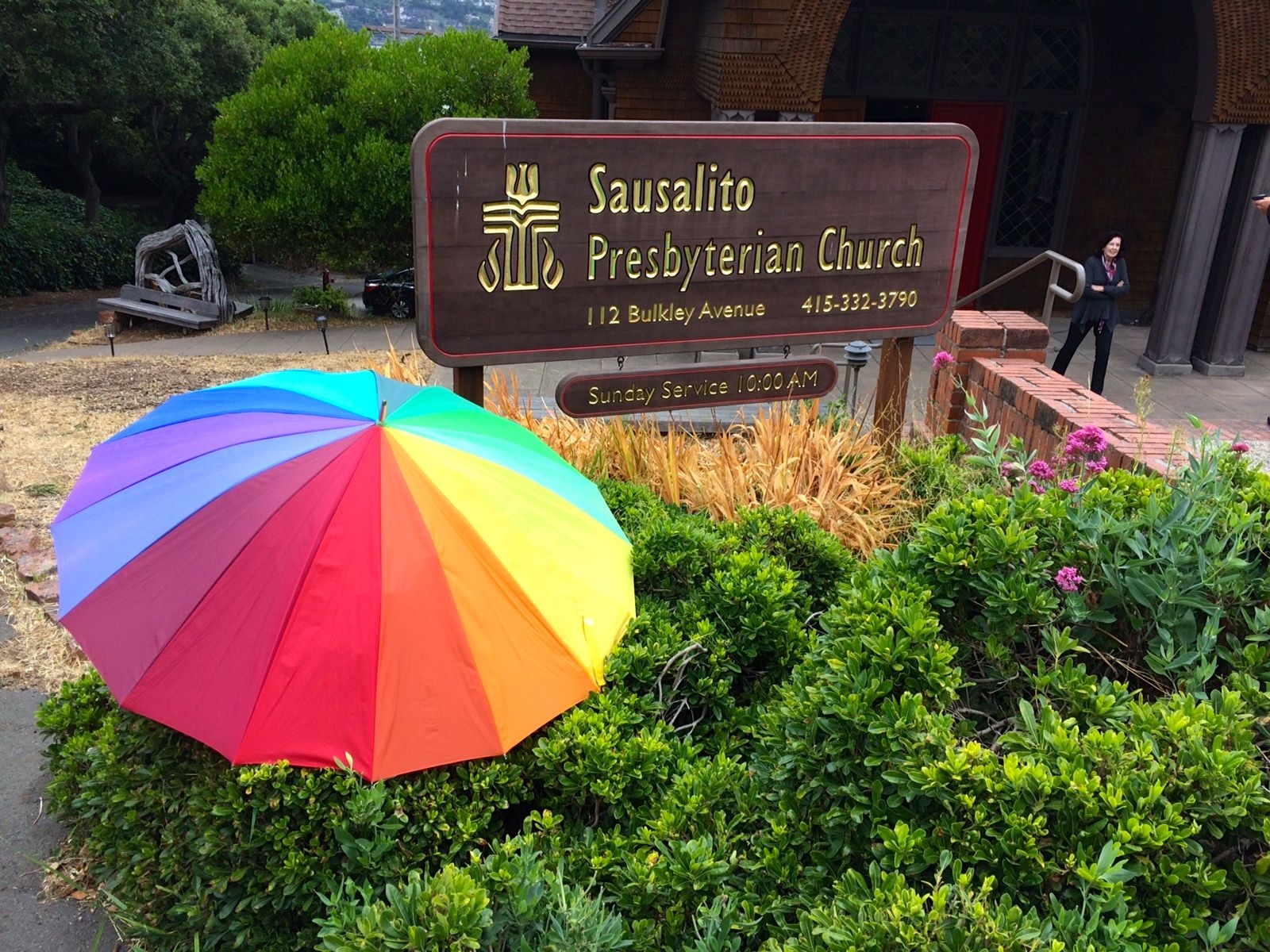 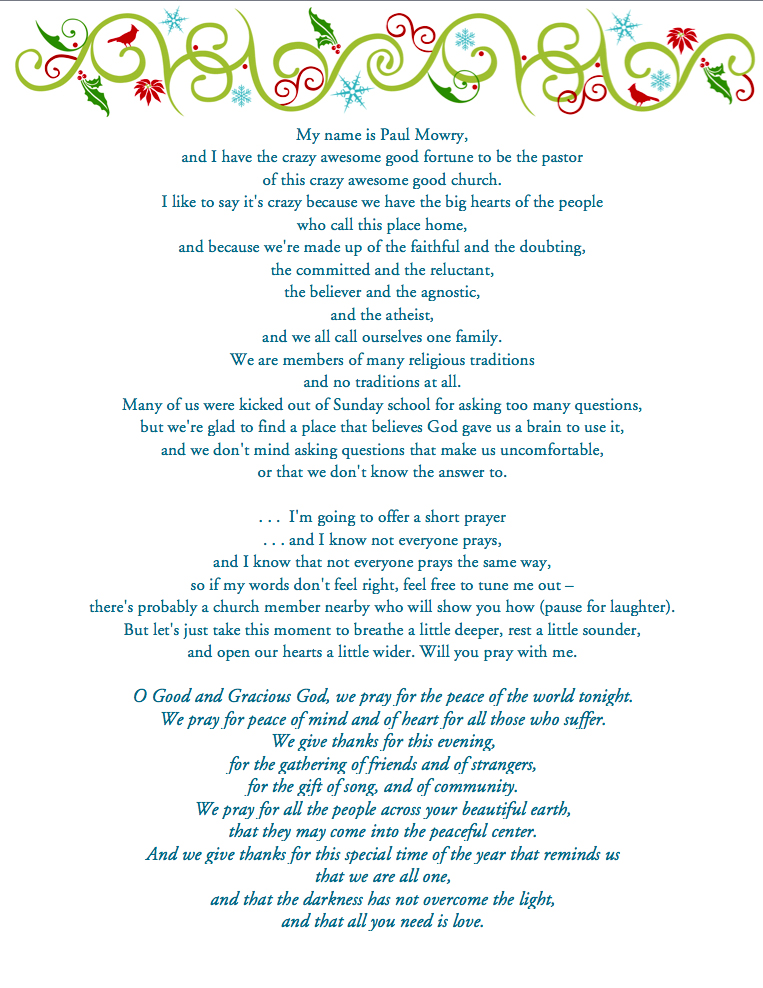 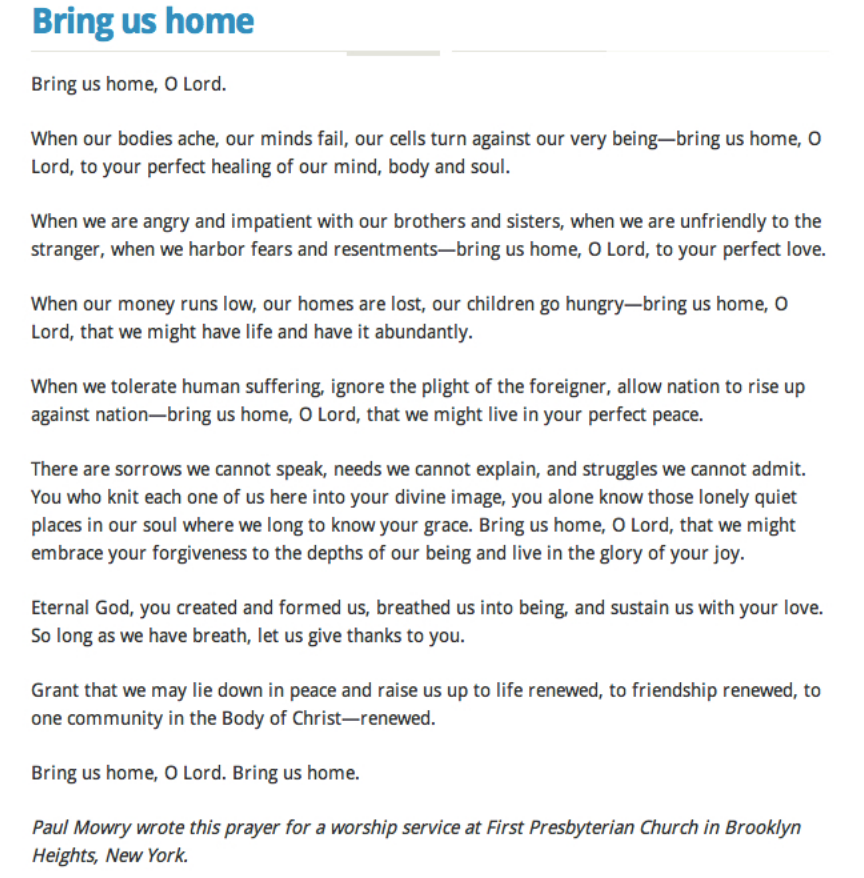