Paul shares the following story, first about the beauty of his Mom’s passing, then some details about her amazing life. 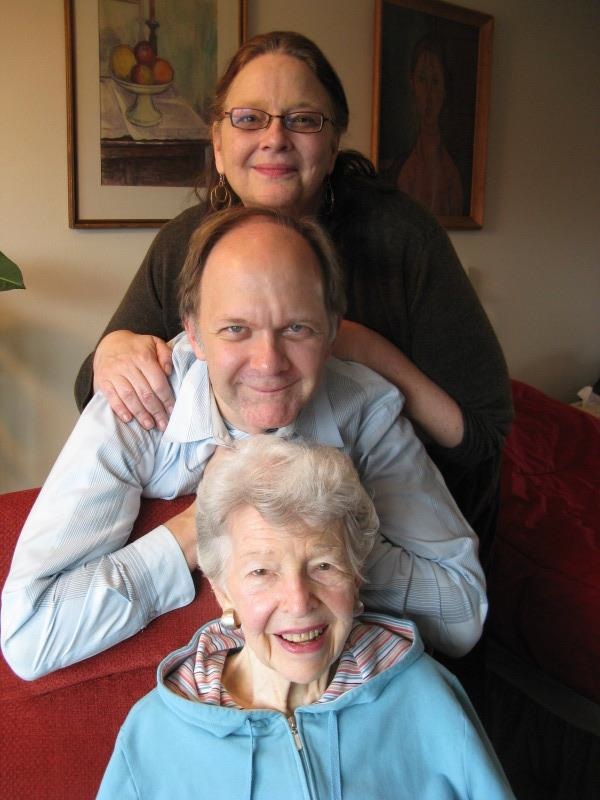 Beloved Friends,
As some of you know, my mom suffered a major stroke on Sunday (Feb. 3, 2013). I flew to Portland right away and though she was unresponsive in the first 24 hours, she had a rally Monday afternoon in which she was able to talk a bit and sit up with help. That evening she became unresponsive again. Though she was not responding to physical stimuli, and couldn’t talk or open her eyes, we noticed that she had a slight but distinctive smile. The nurse attending her was shocked. When one of her very best friends leaned over to kiss her goodbye for the night, the friend said, “Sleep gently.” My mom said very softly with her exhale, “Yeeesss!”

Yesterday we decided to move her from the hospital to the skilled nursing floor of her retirement complex. She had always wanted to die at home. A mighty stream of visitors immediately began flowing to and from her room as dear friends and staff and caregivers of her building came to say their goodbyes. Her pulse was strong and her extremities warm, so we were prepared to sit vigil for the next several days. At 11:00 P.M., four caregivers from her assisted living floor appeared. They were especially close to my mom and they asked, “Who is ringing her call button?! It’s ringing and she always called us around this time of night.” The call button was in my sister’s purse and somehow had been activated, though we couldn’t figure out how. (Insert Twilight Zone music here.) They said their goodbyes with love and tears and left.

It was late at this point, and my sister Judith and my niece were leaving when we noticed my mom’s foot moving. We talked to her and it seemed to us that she was able to respond to questions. “Are you in pain.” A little. “Are you afraid?” No. “We love you!” A big flex of the foot that we read as, “I love you, too!”

I had a cot next to her bed to stay with her overnight. Every so often she made a small sound and I would put my hand on her shoulder and reassure her that all was well. Before I went to sleep, I held her hand and prayed a long prayer out loud. I thanked God for her life, for the body that had served her so well but was no longer needed, and for the love she had brought into my life and the lives of all who knew her. She opened her eyes at one point, the first time since Monday, and I told her, “God is going to lift you up and bring you home. There’s nothing you have to do. Everyone is well. You can let go now.”

It was a most remarkably peaceful passing.

She had an incredible life. Hard at times; exciting at others. Always filled with a deep faith and a great love for all the people she met. My friend, Diana, one of my mom’s chosen daughters, wrote: Marge meant a lot to me and so many people — she encouraged every person she ever met. Marge was very involved in PFLAG and in opposing the numerous anti-gay measures here in Oregon. She really had no fear about talking with anyone about how much her life was enriched by her many gay children — one by birth and so many of who were her ‘adopted’ children.”

A founding member of the Robert Shaw Chorale, and a soloist with a smaller Shaw group that performed on radio and television, she had many happy memories of performing on stage, at Town Hall and Carnegie Hall, on NBC with Arturo Toscanini conducting, and one of her most beloved credits — as Mother Giraffe on a Mister Rogers record called “Josephine the Short-Necked Giraffe.” She was also a VISTA volunteer, adult literacy teacher, Director of the Missouri NARAL affiliate, Assistant Dean of Students at her alma mater, Monmouth College, AIDS Buddy, and served PFLAG as a warrior mom, local president, and member of the national board. And that’s not even the half of it.

So much of me has been shaped by her. I was always deeply proud of her courage, compassion, fight for justice, intelligence, singing, and real interest and caring and love for people. And she gave me three of the most amazing people I know: my sisters Jane and Judith, and my brother, Sam.

I will miss her tremendously. I am so grateful for her rich life, our great friendship, and her peaceful goodbye. And I thank all of you who have reached out to me or my family with caring words and tender hearts during these very intense, yet brief, days.